GUIDO SEGERS 26.11.2012. 23:00
Tweet
So, I’ll gladly share with you the visit to a show I payed yesterday (Friday). When in the luxuary to see a show where Anthrax is merely taking the support slot, one can hardly say no. In Eindhoven, Rock City, I went to see a band that revolves around a living legend: Lemmy Kilmister. 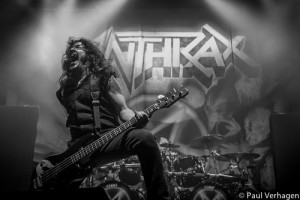 Anthrax opens up with a set that lasts a meager 45 minutes. The band has been friends with Motörhead for a longer time, so they don’t seem to mind this support slot with limited time. In fact they seem to enjoy it a lot. If you play your hit songs like ‘Antisocial’, ‘Caught In A Mosh’ and ‘I Am The Law’ and pump all that in this short set, than you’ve got an intense, fun show.

And this is exactly what the New York thrashers do for the next 45 minutes, they play like a bunch of young and wild dogs, with Joey Belladonna jumping and running around like a black haired Angus Young (minus the school uniform). There’s something intensely powerful about the set, which also has a tribute to Dio and Dimebag in it, but the band never loses its part in this show as a support and that makes it so great. Scott Ian ends the set with nice words and then its getting ready time for the British legends of rock’n’roll.

One never knows why there’s any waiting in between sets with Motörhead, since there’s just not that much that needs to be done. It might be Lemmy playing on his fruit machine, having some jack ‘n coke or just because he feels like it… Anyways, soon the band comes on stage without much spectacular side show. They just plug in, strap on and go.

Phil Campbell and Mikkey Dee both get room for drum and guitar solo’s during the set. One wonders if Lemmy might be getting old and needs to put his trademark Rickenbacker down for a bit. His unique style doesn’t get rusty however and song after song keeps pouring out.

Songs like ‘Iron Fist’ pound your inner ear like a violent ground working tool. The band literally plays louder than everything else and this is obvious from the sheer earthshaking volume that pours out of the speakers. Hits like ‘Over The Top’ and ‘Bomber’ hit like concrete blocks, but also manage to get everyone to sing along.

A little joke follows from Lemmy when he introduces ‘The One To Sing The Blues’. “This one is from 1916… that’s the album, not the year…” Anyone else seen the shirts ‘Lemmy is older than anyone else’? I have. The band ends the set with perennial classic ‘Ace Of Spaces’ but ofcourse comes back for a song or two more. ‘Overkill’ is the end of the set, even though parts keep being added. Then it’s over and all we are left with are eardrums in aftershock. 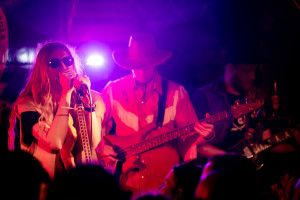 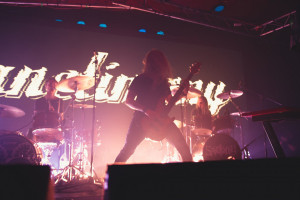 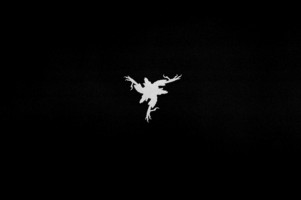