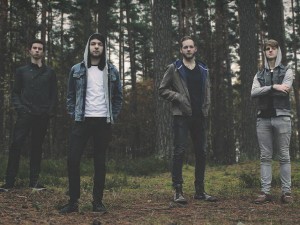 This time we’re going to focus on the band Audrey Fall, who made an impression with their new album ‘Mitau`. The band plays atmospheric postrock with a natural feel to it. The album of the four guys sounds like the band has been around for a while. It is only their first one though.

I would like to make it a point to say that this polite band responded rapidly and friendly to the questions. Some never do, but hey, that’s their own loss. The album ‘Mitau’ makes me want to see Latvian nature again and experience the hospitality of the country. This is definitely a band that deserves a share of fame for their awesome work.

Let’s not dwell on things any longer and go into the questions I’ve decided to ask them for your reading pleasure. Here more about a band that writes captivating, beautiful music. We have the whole band answering questions, except drummer Aigars, but he thought it was all good so that’s covered.

GS: Who are Audrey Fall and how did you guys get together as a band?

Jurgis: We're just four guys from Jelgava. We were all somewhat connected before we formed the band. We are:

Pauls: When I started to play the bass I already knew Elvijs. I knew that he played the guitar so I asked him to contact me if he ever wanted to form a band.

Jurgis: Basically Elvijs brought us all together. But we weren't a post rock band in the beginning, we had vocals too. We decided to play instrumental music 2 years ago.

GS: What is the story behind the name?

Jurgis: There's really not much of a story, Elvijs was the one who came up with the name.

GS: Did you guys play in other bands before

Jurgis: I played in a couple of bands before, but it wasn't anything serious.

Pauls: I also played in a couple of bands before, but it was something I really don’t want to remember.

Elvijs: I played in a indie rock band with some high school friends.

GS: You make an interesting organic sounding bit of postrock. What were your main inspirations for this sound musically?

Jurgis: I can't really say that something particular inspired our sound, it was mainly experimentation in the recording process. We had some ideas how some parts of the album should sound and then tried to get there while recording. One of the reasons we went fully instrumental was the opportunity to have more creative freedom and ability to mix in some things we couldn't use when we played post hardcore with vocals.

Pauls: It’s different for each of us. I was trying to find my sound through Russian Circles and Lower Than Atlantis, I simply like the way it sounds for them.

GS: What ideas are you trying to convey or capture in your sound?

Jurgis: We love contrast between the heavy and soft parts in music, so we try to mix the intensity of heavier riffs with calmer melodies. I see our music as a roller coaster of various emotions.

Elvijs: Think of a train, which is rushing through cars, houses and rivers, while its painted pink and covered with flowers. Contrasts.

Jurgis: Mitau is the old name of our hometown Jelgava, which was almost completely destroyed during World War II. All the songs in Mitau are referring to different historical places, people or events that took place in Latvia. Some of our listeners have mentioned that listening to the album when you know the meaning of the song titles is a different experience, it shows them in a different light.

GS: How did the recording and writing process go?

Jurgis: It took us more than a year to write the material for Mitau. We then decided to record the album on our own and the first time we tried, it sucked. We didn't have the experience to pull it off. It took us 6 months to realise that we have to start over. I read and learned a lot about recording, what mistakes we did before, what we should do differently, and then we basically recorded it all over again for over a month non-stop in our improvised studio. Some things we could have done better, but overall I think we managed to make it sound decent enough.

Pauls: It was very stressful for us and we experimented a lot. But luckily we have such an amazing producer Jurgis.

GS: Why should people check you guys out and what song would be their best first meeting with your sound?

Jurgis: So far our album has received quite a lot of positive feedback, so I think it is worth checking out even if you're not that familiar with post rock. I'd say you should listen to ‘Driksa’ first, it has a lot of characteristics that define our sound. Our “main” single ‘Petrina’ is more friendly and classical sounding. But I think there's a song for every taste in Mitau.Pauls: I think that everyone can find something for themselves in Mitau. It has enough of contrast.

Elvijs: Listen to ‘Wolmar’, but all of them are good.

GS: What is your way of working when writing new songs?

Jurgis: Honestly, I can't say that there's one way we write our songs. Most of the time one of us just comes up with a riff or a general idea for a song and then we build on top of that. Sometimes we just jam and improvise for a while and if something good comes up, we might use it later. But there's quite a lot of material that we just throw out, because it won't fit anywhere.

GS: What bands from LV could you recommend? (and why?)

GS: Who should win the World Cup football?

Pauls: Mexico. Because I have a Mexican Fender.

Elvijs: Finland. They won't, because they are not there, but they should, if they could, but they can't. But they are great F1 drivers.

GS: What would be your ultimate tour package and what would be on your rider for venues (only red M&M's, only water imported from Finland, you know the crazy things)?

Jurgis: A couple of beers would suffice for me, so nothing crazy.

Pauls: For me it would be enough with uncarbonated water.

Elvijs: All you can eat sushi.

GS: What record have you been listening to lately?

Pauls: At the Drive-In - Chanbara

Elvijs: Chvrches and The Naked and Famous.

GS: What does the future hold for Audrey Fall?

Jurgis: Perhaps a new album next year, who knows. Right now we're not rushing anything.

GS: Any final words or things you want to share?