GUIDO SEGERS 06.01.2014. 16:50
Tweet
Apparently everyone in Latvia likes Wagars. Rightly so, they make some cool tunes, but there’s something more to this band than meets the eye. On some level their incorporation of folk culture into their whole apparel seems to make people quite happy and enthusiastic about the band. 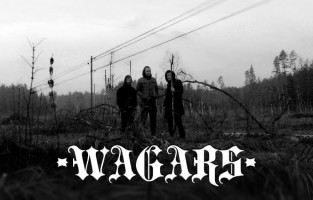 Their debut was quite cool and I have no shame in admitting I proudly wear my Wagars t-shirt to many concerts. The sound is dark, gritty and definitely filled with that punkrock vibe. On the other hand, there’s a certain atmosphere or vibe to it that makes it hard to pin down in one genre. Since we’ve been in touch before, I asked drummer XedzaX if he felt like doing an ‘Eindhoven Calling!’ about Wagars. With a second album on the way, a good moment to do so. So here we go: Wagars.

GS: So what is Wagars?

GS: Who are in Wagars and where do people know you from (other bands)? And of course, how did you guys get together?

“We are four guys, who are involved in Latvian punk hardcore as well as metal and grindcore scenes (of course these “scenes” are not separated from each other) for as long as more than 10 years by now.”

“We all have played in bunch of local bands: starting from hc punk up to goregrind. Guitarist and vocalist also play in grindcore band Trauma Moralis - this project was on stage in Obscene Extreme Fest, more than 150 gigs in whole Europe, and had even 2-week tour in Mexico! Bass player played in goregrind band Dehydrated Goat and is currently taking part in a new black metal band Eschatos. Drummer and guitarist play in a hardcore band Kastete. Drummer is also taking part in a thrash metal/punk project Kapakmens. So we're all local scene freaks, trying to push the crowd and make some good noise.Getting together was easy – we knew each other before. Latvian scene is too small to not to know each other.”

GS: What is the idea and the concept that Wagars tries to bring across? What do you want your music to do?

W: “The main idea was to play crusty black metal - something new to all of us. Something heavy and still uplifting. Something serious but still enjoyable. So that music presents our emotions and lyrics put out our thoughts.”

“Some of our lyrics are an admiration of the untamed power of the nature and, probably, more of our own nature in Latvia, coz' we tend to spend time there more than in other places in the world.”

“We also touch the topics of the industrial progress and quite a quick death of our planet driven by the greed for money and power. We express also our thoughts on superior religions which have spread around the world by destroying the indigenous cultures and diversity of perception of nature and world around us. Actually, that is not just religions. These are also "Western democracies", corporations, businessmen, and other scum.

But overall, we do not consider ourselves to be a political band.”

GS: Who are your influences (musical and other)? Or who do you view as an example?

“Our lyrics are influenced by harsh Latvian nature, history, legends as well as anti-consumer society thesis. In our upcoming album, some songs are made inspired by books.”

As for the individual level:

“Each band member basically has completely different background that influenced us and made us who we are today.”

“For one of us - in 1998, at the age of 12, there was huge wave of nu metal. Good old Deftones, Slipknot, Soulfly, even 1st Limp Bizkit album - these were the first cassettes, illegally copied or even recorded from the radio shows in a shitty quality, exchanged by a group of friends. Then came Cannibal Corpse, Six Feet Under, and so on, so on. For the other - in 1999 started to hang out with hc/punk people in the local town. Listened to the cd's and cassettes from all over the world (got lucky to meet foreign punks). Most of the records where second hand underground copies (this is definitely the best part). At that time did not buy anything - didn't have money for that.“

“We all have experiences from the past. And we just try to use the best of it to express ourselves today and forward. Most probably, we don’t have an example; rather we have references and influences from past and present times.”

GS: In descriptions Wagars is said to hail from Latgale. Latgale is on the edge of what we know as 'Europe', how would you explain what the place you're from is like to someone like, well.. me, living in the heart of the EU in a way. Do you think it shows in the attitude and music of a band, compared to a punkband from the other side of the continent?

W: “To be honest, no one of us comes from the part of Latvia which is known as Latgale. We just identified ourselves with it because we see this region more wild in the sense of nature – woods and lakes and so on. Since globalization hits us just like any other place and since basically no band is a social/political band these days, the attitude is the same as elsewhere.

If there would be any political band today (some years ago there were quite a few), I assume, there would be a lot of differences between East and West, because of the different political and social background. But we never can know for sure until that kind of band exists.”

GS: What is the recording and writing process of Wagars like and how did this feel different between the first and second album?

W: “We try to make recording sessions as efficient as possible. But it doesn’t mean we don’t enjoy that. The second recording took a lot more time than the first one. Who knows why. Just a bit more songs. More elaborated songs.”

GS: Your second album isn't out yet, but how does it differ from the first?

W: “The second album is going to have more songs than the first one for starters. More inspiration comes from Latvian classic literature. We think that the sound will be more epic and slower. Some of listeners have said, that new songs could be great doom metal stuff, if we'd play them 3x slower. Still, we hope that songs are going to be catchy and kind of melodic to a listener’s ear; with more Latvian sorrow and “winterness” inside.”

“The new album will be a logical continuation of the 1st one. The lyrics are based on Latvian mythology, history, also our cultural legacy - there are many great authors from our small frozen land. We hope that our listeners will enjoy textual side of Wagars. All lyrics are translated in English, so there will be a chance for everyone to dive into Wagars world.”

GS: What do you think is the main strength that made Wagars #1 such a success in Latvia?

W: “This question should be asked to the people who like us. For some it is lyrics, for some d-beat sound. It’s really hard to answer.”

GS: What do people get when they go to a Wagars concert? Can you tell us a bit about your live experiences this far?

W: “Well, hopefully they get whipped by our music and afterward, hopefully, some neck-ache from head-banging and sore-throat from sing-alongs. Our live experiences vary a lot - from big crowds to empty bars/clubs, from freezing countryside festival to dehydration in a club,from basements to full service stages.”

GS: What was the best and what is the worst place you played at?

W: “It is tricky to answer. Any place was the best where people enjoyed listening to us. Where organizers take care of things and are welcoming. The worst - where organizers didn’t take care of the event and just treated us badly (probably, all the bands that played there). I wouldn’t like to extend this topic. Hopefully, they know who they are.”

GS: Where and with whom would you like to tour one day?

W: “No particular band comes in mind. But definitely some punk band, with punk attitude, and to punk places. However, a 3-month tour to Asia with Wolfbrigade wouldn’t be bad.”

GS: What's the weirdest thing you encountered as a band?

W: “It's quite bizarre, how Wagars gained such an attention in Latvia. The strangest feeling is that people sometimes recognize us on streets, in shops, gigs, etc. They come, shake hands, and ask when will be the next gig. That’s quite strange, but cool.”

GS: On your first album, there is some typical artwork (also the tees) and poetry to be heard on the record. What motivated the choices for those?

W: “For the album, that is some kind of medieval drawing called The Birth of Athena. Basically, the idea is that we want to crush ones head with the music and lyrics and the ideas, so that, hopefully, something useful comes out.”

“The print on the t-shirt is an ex-libris drawing from one Latvian artist from 1970ies – Peteris Upitis. The work is called ‘Sausne’ (eng. – dryness, dry matter). The idea behind this – during the dry periods of the year the tree dies. The trunk also could be broken. But there are still remains (in the form of branches) that still survive and reach out for sun. And now try to imagine life, when someone is broken but still struggling towards the light of the day. The poetry on the album comes from the Latvian movie ‘Likteņdzirnas’ (eng. – Mills of doom; Mills of destiny). The idea – life is harsh, it does not preserve and protect anyone from the twists and turns of good and bad outcomes.”

GS: What interesting things are going on in your opinion in the Baltic metal/punk scene? What bands do you think are interesting right now and why?

W: “ The Baltic punk music scene just experience a historic moment, when Baltic punk/hardcore/crust/grind compilation “Thrashin' over the Baltics” was released. Apparently, there are so many good bands around us. Please do not hesitate to check that out!”

GS: What future plans do you guys have right now?

W: “Main focus is on the preparing of the video of on song and the release of second album. Then we will see.”

GS: Are there trolls in Latvia (referring to the quote”… in every Latvian person there’s a little Black Metal troll sitting inside”)?

W: “We all are black metal trolls at some level. Dark and grim. Even those who manage to present themselves as shiny and happy, deep inside they are full of dark urges.”

W: “Stay tuned for some news about our activities and hope to see you all at our gigs. Come to say hi.”

So, go check out Wagars, their new songs sometime soon and their live shows! Keep feeding that little black metal troll inside you.

Eindhoven Calling presents you, the reader of Alternative.Lv, an outside look at the Baltic scene. I’ve been to all Baltic States and have seen and heard quite some bands there. Back home, I write for various e-zines and magazines about music, now also for this one. This editions band is Burn Still from Tallinn. Maybe you would like to be next? Let us know via alt [at] alternative.lv