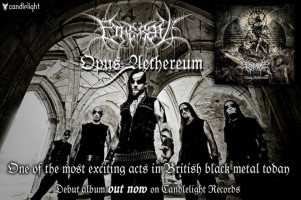 What's your view on the value of music today? In what way does the abundance of music change our perception of it?

It’s a staggering thought actually, when you consider the sheer volume of music being made today, I can’t begin to fathom the number of musicians out there who are recording and releasing music. I think that it demonstrates that music is very highly valued, by different people the world over, if it wasn’t valued there wouldn’t be so much created. Yet at the same time we’ve ended up with such an abundance of music that it can be hard to find something of real value to yourself as a listener, and for every innovation there is endless immitation. However when you do find music that resonates with you, that experience is just as rewarding as it ever was. The abundance of music nowadays is simply a consequence of this changing world, we are overwhelmed by choice, and so the music that stands out amongst the endless plethora of mundanity has proved its worth by making an impact when so much has been done before. In a crowd twice the size you must scream twice as loud to be heard, and maybe that’s not such a bad thing.

How do you consider the whole black metal scene in UK? Can you see something what ties all those bands together?

The UKs black metal scene is strong right now, I think there are more people into the music and attending shows now than there ever used to be, and of course consequently there are more bands over here working with the style.Honestly I think there is no universal ‘british sound’ to the music. There is a lot of diversity in the ways in which people over here are approaching black metal. There are a number of bands over here that are focusing on giving the black metal sound a British identity, with lyrics about British history or heritage or whatever, and I think for some people that style represents British Black Metal.However I don’t consider Ethereal to be a part of that, and there are a lot of other bands over here that don’t fall under that banner. For me, black metal should represent opposition, it should be anti, provocative and against the grain, and so what we do doesn’t explicitly have anything to do with our nationality or history. It doesn’t matter to me if we’re considered to be part of the ‘UK sound’ or not, our philosophy is one of individualism, so it’s a positive thing that there is little to tie the UK bands together.

How does your new album sound? Did the record turn out the way you wanted it to?And a bit about the design of your new album that’s also an important part of the message you give to your listeners.

We’re all very pleased with Opus Aethereum, it’s a very in your face kind of record, we wanted to make a statement with our first album. You can never really plan the end result, and throughout the writing and recording the album began to take on a life of its own, but I think it came across the way that we wanted. I agree that the artwork is an important part of the message, and fortunately for us choosing it was actually quite simple, as soon as we saw the design from our friends at Triple Sies Design, we knew it was the right artwork for Opus, its imagery aligned perfectly with the overall lyrical concepts of the record.

How are the reactions in general towards the album? Can you mention review or opinion about your music that impressed you most and get stuck in your mind?

Overall I think the reactions to the record have been great. I think people either love it or hate it, and I’d rather have people hate it than feel indifferent, invoking a strong reaction is the primary purpose of what we’re doing. As far as reviews, I think they have largely been positive but I don’t pay a great deal of attention to them, that’s not to say the recognition isn’t appreciated. I just feel that to focus too much on the opinions of others would be damaging to our creative process.

How do you see the role of the listener in the musical communication process?

I don’t think you should simply aim to please your fans when writing music, because I think if you try and steer yourself to what you imagine people would like, you’re very likely to miss the mark, or repeat yourself. It’s of paramount importance to us that we do what feels right, not necessarily what is expected of us. Ultimately, what we create must come from within ourselves, and consequently the listener is more likely to feel connected to a piece of work that is sincere.

Are you working on new music right now? What are your future plans?

We are writing the second album, it’s too early to say anything about it really but things are shaping up very well. It’s a very creative time and we all have a lot of very strong ideas, Im very excited and curious to see what is going to come out of it. We are aiming to write the best record we possibly can, to show progression far beyond anything we have done before... and so I am sure this next record is going to be a monumental piece of work for us all. Aside from this we will be aiming to perform on stages further afield, to spread our music and our message as far as possible, to expand every dimension of Ethereal.

What is the main conclusion you have learned during these years about life and music being two inseparable things?

Music has always been the primary part of my life, and it always will be. Though in recent years since joining Ethereal creating and performing music has been my sole focus, everything I do in my life outside of it in someway contributes towards it, and in turn everything I do in music makes it’s impact upon my life. Indeed the two are inseperable, though I try not to analyse too much, because after all there is still work to be done.