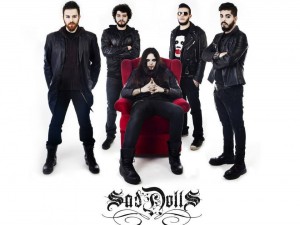 First of all, we have to make a short introduction with all those who haven’t heard about your band. So, for beginners – what is your personal description of the sound of  SadDoLLs?

George: Hello and thank you for this interview! We would like to call our sound as “Darkwave Metal” we kinda sound like that, in the new album at least. Our sound has been given loads of names through time though. Some reviewers even called it Love Metal. As I said over previous interviews there is no such genre, this is just an inside joke that the Finnish band HIM created, and even used it for one of their albums, but it’s not a genre it’s just a joke. Our sound has more in common with bands like Lacrimas Profundere, The 69 Eyes, Deathstars, Blutengel, Diary Of Dreams etc.

If you could distance from a fact that SadDoLLs is your band, what do you think –what could have been your feelings and emotions while you were listening to music of SadDoLLs?

George: You know, I have asked myself this question many times, I’m still not sure about the answer, I think I would love it or I would just hate it!

Music for you – is it a method of self expression or it is a way how to achieve definite aims in your life?

Paul: A big amount of the first and a small of the second but both.

If you don’t mind, please tell me a little about every band member: work, interests, family and something good and bad about every one?

Paul Evilrose. He is our guitarist and main song writer, he is also our unofficial manager and booking agent. He is really a big HIM fan and he hates birds. He is a sound engineer so he along our bassist made the whole album pre-production back to his home studio. He organises the band great, but he can be a little bit pushy sometimes.

J.Vitu. He is the second guitarist, we met him back in 2013 at a HIM tribute we played along with Juska Salminen (Ex.HIM) and one month later he became our new guitarist, you can even see him appearing on the “Criminal Of Love” video, that we shot originally with the previous guitarist, but since he left, we reshot the guitarist scenes with J.Vitu and we released the video with him. He is a great acoustic guitarist also, and he plays music in little bars professionally. He is the calm power of the band and we all love him, he’s been a member for over a year now, but we all feel like he has been a member since day one! If I can find something bad to say about him, that could be that he has ideas and even if they are not right or appropriate for the time being he get’s stuck and insists with them for a long time.

GB. GB or Brass or Fidias. He is our bass player, and he is the guy we replaced our girl bassist Mary back in 2012 with. He is a sound engineer too and he also shoots and edits videos. He has one older sister and he has a Greek – American ancestry. He is also writing songs and helping with the arrangement of our songs. He is the craziest of us all. We have great fun with him. The bad thing about him is that happens only when we he has time to do that, ‘cause he is extremely busy with other projects too and sometimes we even release a man hunt in order to reach him. J

And as for me, I’m the oldest guy in the group and I have multiple issues. J I cannot really talk about myself, maybe a psychologist could do that for you or an ex girlfriend of mine…

What's the best and worst thing about being in the rock or metal band?

George: Let me start with the worst. It’s stressful as hell, takes away a lot of energy and time and also money, because it’s an investment . Me and Paul should know that more good than anyone by know ‘cause we have been doing this for many years. The mainly bad situation lies in Greece, we are coming from this country and this is bad for popularity because our country does not have a decent metal scene and this is because it takes loads of time and money and the Greeks…well they don’t listen to rock or metal, they just listen to Greek music (I just don’t know how to describe it J ) but the good part is the one right now. To earn the privilege to give around interviews and play with the 69 Eyes in Estonia, or appearing at the Dark Storm Festival in Germany with artists like VNV Nation and Blutengel and Mono Inc. and Gothminister, or being the support band for Paradise Lost and Moonspell and Lacrimas Profundere, even having Skinny Disco from Deathstars and Jape Peratalo from To/ Die/ For and Juska Salminen (ex.HIM) and Roberth Karlsson from Scar Symmetry playing parts on your albums. We even get the chance to play the 69 Eyes show in Estonia with Esa Viren (To/Die/ For) on the base! How cool can that be? So we can’t wait to get there and do our thing!

What state do you think rock/metal music is in at the moment?

In your opinion – why bands who have started their career in similar conditions, who are all talented and diligent, why most of them doesn’t achieve their aims?

Paul: It takes a lot of time and money out of you and it also needs a lot of hard work and patience. Most people don’t have that and this is the main reason we have changed so many members over the years...

What's the most underrated rock/metal band in Greece?

Paul: We are. At least within the Greek music territory…

Whats going on on the Greece rock/metal scene? Which bands from Greece we -listeners from Latvia- must know?

Paul: There are many great bands coming from Greece that are also well known abroad, such as Rotting Christ and Septic Flesh. Siva Six is a great band to get familiar with, they are a great ebm electro industrial Greek band, they guys just rock! Also there are the glam rockers Cyanide 4, they are doing an amazing job! You should definately check out CygnociC, they are future of goth dance music of Greece, I heard their music recently and just loved it!

Do you know anything about Latvian and Estonian rock/metal scene? If not, what would you expect from it?

Paul: No, we are not familiar with any bands from Latvia and Estonia and we sure don’t know what to expect, but I’m sure there are great bands there.

Feelings before the gigs, during the concert and first thoughts when you’re in a backstage after performance?

Paul: How will we play and how we will sound, and then - how did we played and how did we sounded. J Also meeting fans and sigining copies is a great experience too.

Tell us about most impressive gig – where it took place, time when it happened and audience!

Paul: This was the Dark Storm Festival in Germany. We played on a huge stage with great equipment in front of a big audience that liked our sound and songs, and later we got the chance to meet some of them and sign some flyers and copies. It was a crazy night that we will never forget!

Most extreme and funny situations what has happened on concerts and during bands „usual” life?

Paul: Being a member in this band is extreme enough. J So many things has happened within these years I can’t even remember nowadays. Playing at the Dark Storm Festival in Chemnitz was one memory that cannot ever be erased, it happened during Christmas and in order to get to Chemnitz we visited Prague, the most amazing city in the world! I personally fell in love with this city since we landed. If someone wants to live free and have fun all day you just have to move to Prague! So there we are walking on night in the almost medieval roads of Prague looking for a bar to have some drinks and a good friend of ours that lived there took us to a place that was the total underground! Crazy musicians and actors and poets were hanging around in that smoky weed smelling place, drinking warm wine and playing music, they were all acting like they were one big family, there were no strangers in this place, not even us, that we came from another country…this place I think is one of it’s kind and I’m looking forward to visit it again at some point!

What is the main dictum you have learned during these years about life and music as two inseparable things?

Paul: Music is a part of our lives, and our life situations help us out to make music and write the lyrics. I can’t say that we learned something, we just got more mature over the years and getting to finally record or latest album “Grave Party”, the most mature and serious album we have made in our career.

If you had to write a song right now, what would the first line be?

Paul:  “Devil is the aim and lust is the target, soul burns in flames and heart meets the dagger.”

What about your new album? And I’m curious how it turned out that your album will be released via Inverse Records?

Paul: Inverse is a good indie independent record label plus distribution company from the freezing Finland. The collaboration with Inverse Records came really suddenly. The guys from Inverse liked a lot our new stuff so we came in a agreement for a release in 2nd of May.

Our new album "Grave Party" is totally different than our previous albums. We think it is the best album we've done so far. It's a new genre for us. We call it "Darkwave Metal". We combined all our influences along with many electronic elements and catchy keyboard riffs. It's heavy and we think is the record that represents 100% the band's sound.

What else will be coming up for you guys in the near and far future?

Paul: We will release our brand new video of the first single from „Grave Party” called „Lady Cry” at the beginning of April and after the 69 Eyes gig we will return to Greece for the album’s release live party at Death Disco club and keep on promoting the new album with shows and music videos. A small tour was scheduled in May around Germany but since we left that booking agency we have postponed it, so it may take place in October or November, we will see!

Imagine you have to move to a country with absolutely no music. You are allowed to take just one record with you. Which record would you choose?

Tell us about your next show in Tallinn and why we should be there?

Paul: We have been given the opportunity to open for the legends, The 69 Eyes at the Rock Café in Tallinn, so we are extremely excited and ready to come and present you our new songs and singles from our previous releases. You should be there because we have also prepared a great cover song for all you lovely people and we can’t wait to share it with you! And it’s a 69 Eyes gig so? Wtf? You can’t miss that right? J

So see ya there lovely vampires!