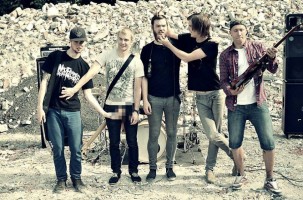 Eindhoven Calling presents you, the reader of Alternative.Lv, an outside look at the Baltic scene. I’ve been to all Baltic States and have seen and heard quite some bands there. Back home, I write for various e-zines and magazines about music, now also for this one. This editions band is Burn Still from Tallinn. Maybe you would like to be next? Let us know via alt@alternative.lv

I got to see Burn Still live and it was awesome. Not many people were there when they played in the warm summer sun around the mid afternoon, but the tent was shaking under the impact of the pounding metalcore of this Tallinn five piece. Later I got to hang out with them in Tallinn to hear more about the scene, hardcore and the advantages of carrying around a huge stuffed tiger. Some great guys, making heavy music that you should check out from Estonia.

So, they agreed to answer some questions for us and tell us more about their music. Recently they’ve been busy playing with their latest record Rise. The followup to their successful self titled album, which is also enough reason to include them in the Baltic hardcore  mixtape.

So we shot some questions their way. They band pretty much answered these together, so they’ll be indicated as BS, short for the bandname ofcourse.

GS: So, who are part of Burn Still and how did you guys end up together?

BS: Well, basically we’re just five dudes from Estonia who love hardcore and metal music. We just do the stuff that normal 20 year-olds do really. We work hard, play hard and party hard.

So it started of when Taavi met Martin L, who had a schoolmate called Martin M., both happened to be interested in starting a band, so they did. First there were two brothers on drum and vocals, named Jan and Ken Keller, but they were living in Finland at the time. Because they didn’t visit Estonia that often, we had to look for new members. On an internet forum for drummers we found our guy in Sulev. He has some awesome double bass skills and we were quite stoked about that. Turned out he had a brother, named Olev, who was into this sort of music and was keen to try out for vocals. We did some rehearsals and decided that this was our guy, so the band was complete. This all happened around 2005/2006.

In 2010 Martin L. decided to put his energy to other musical projects and left the band. It took us a few months to figure things out from there so then we asked our good friend Martin R. if he was interested to join. He was in the band named Into Salvation, which had called it quits, so he was happy to join up. So right now the scene is dead in Tallinn, it sucks, but we are stupid enough to continue doing what we do.

GS: Where does the name Burn Still come from and what is the message you guys want to bring across?

BS: We kinda just tried bandnamegenerator.com first, but this didn’t really work out very well for us so we put all the ideas to the vote. Burn Still sounded cool at the time, so yeah… we picked that, it has no special meaning.

We don’t really have a specific message, our songs are about the things that come to mind and bother us. If people can relate to our songs and lyrics, than that’s a good thing ofcourse.

GS: Do you guys have any sideprojects going on next to this band?
BS: Well, Taavi has two other bands that you can call sideprojects. One of them is the band Two Wrongs, which plays a heavy style of hardcore. Sulev plays drums in that band (check them out here).

The other is an instrumental band called OceanDistricts, which is more postmetal/rock oriëntated. Martin L. is the guitarist in that band (check this band here).

Olev, Sulev and Martin R. have a side project called Weekends At Eden, which is more or less an experimental metal band, pretty much in it’s baby shoes as yet.

GS: So, you were saying that the scene in Estonia is dead.

BS: The whole metal and hardcore scene has been declining for the last 3 or 4 years. Lots of bands have called it quits and very little new bands are coming up. The crowds at shows have been dwindling, people find other genres or seem to ’grow out of it’. There’s only a handful of good bands that are still active, who keep pushing things forward and keep the scene alive.

The problem is also one for club owners and promotors when not many people visit shows. It’s a business risk for them to organise shows for local bands or even big names from abroad, so they come to Estonia less. Fortunately there are some guys who still bring some cool bands to Estonia from time to time. We have awesome shows and the people involved in the scene do try to make the best of it.

There are still plenty of intresting bands ofcourse, such as Talbot (who you could read about here), Of Roofs, Genes And Stolen Meanings, Who Framed Roger Moore?, Eye Sea I and Catafalc to name a few.

GS: Burn Still released a bunch of records this far, all self released. Can you describe the development through those?

BS: Yeah, unfortunately there’s no label here at all that is interested in this music. Anyways, we released 3 EP’s and a bunch of demo’s. It’s a bit difficult to describe the progress more specifically, because it all feels like a natureal development from one CD to another. The songs are more mature nowadays, more thought-out, without trying to be too complex. We try to learn from mistakes we make and like fine wine, Burn Still gets better with age.

You can check the last record Rise over here.

GS: You also worked with celebrated hiphop artist Metsakutsu on your s/t record, is there a hiphop influence in your music?

BS: There has not been a direct hiphop influence on Burn Still, but we felt we needed to do something different and easy going. Metsakutsu is a friend of ours so we had the idea to collaborate on this track called ’Forget Your Dignity’. It turned out pretty good and we’re happy about it.

Right now we haven’t got anything major to report on recordings and such. We take our time to write the best stuff we can, there’s no rush for us. The new stuff we’ve done so far has an oldschool feel to it, more thrashy and a bit darker than before. We feel pretty stoked about it, we’ll keep working hard for new stuff for people to check out though.

GS: There was the video shoot?

BS: We’ve been thinking about doing a video pretty much every album we did this far, but only recently something came out of that. Our friend Stefan from Dark Reigns Prouctions heped us out. The video is completely DIY and that felt good for us. We got our video into the Estonian Top 7 on TV and got to the first spot in the first week. We stayed in the charts for a month.

It’s not like this is a huge thing, considering the size of the Estonian population, however it’s still the only chart for video’s in our country. It’s a good place to see the video get played apart from youtube. Seeing it is on a national channel, it shows that people care to tune in for music being made in Estonia.

GS: Do you think the video might inspire kids to get inot this music?

BS: We’re just regular guys that love to play music, if we succeed in getting to people, inspiring them with our songs, lyrics and video’s, that makes it even better. The most flattering thing for a band is to see people try to do wha tthey do, either imitate or create similar things. The scene is really small here so we don’t even try to think influence anyone, but bands ans people compliment us on what we do and that’s a great compliment for all you put into a band, touring and creating music generaly that doesn’t attract huge masses.

GS: Alright, so what bands did inspire you guys to play this kind of music?

BS: We all have different tastes and there have been many bands that influenced us through the years so it differs a lot per person.

Olev: bands like As I Lay Dying and Lamb Of God got me into this music years ago, but nowadays bands like Stray From The Path, Suicide Silence, Deafheaven and Every Time I Die are a big inspiration, especially vocal-wise. I try to listen to different styles of music, but mainly metal and hardcore stuff.

Sulev: Sulev is a die hard Iron Maiden fan. He plays in three different bands, so he gets his dose of different metal and hardcore music from all over the place. Interesting enough, he also is a big fan of composers of filmscores like Hans Zimmer or John Williams.

Martin M.: Likes a bit softer sounding stuff, like Queens Of The Stone Ages, but favorites are the likes of Between The Buried And Me, Black Dahlia Murder and The Chariot.

Taavi: I started listening to metal when I was 13 years old and my taste has changed over time. Nowadays I listen to a lot of hardcore bands with a metallic sound to them, like Hatebreed, First Blood, Bury Your Dead, Trapped Under Ice, Terror, Ruckus, Homewrecker, Harm’s Way.. I can go on. Death and thrash has influenced me as well, like Sepultura, Exodus, Cannibal Corpse, Obituary and Arch Enemy.

GS: So you guys played quite some shows over the years, where did you enjoy playing the most and with which bands?

BS: Playing in Tartu is always nice, the southern part of Estonia really likes to party and hang out, wo we really have fun playing there. Playing live shows is always fun really, no matter where we play. We got to open up for Parkway Drive in Helsinki once, that was quite a big deal for us. Last but not least – festivals. Festivals are always great to play at, because there’s a lot of people and a chance to hang out with friends there.

We’ve played in Latvia a bunch of times as well, we were at Zvera, Fonofest, Freezefest and did some club shows in Riga as well. Who we’d love to share the stage with? Haha, Belphegor, Behemoth and Gorgoroth. Also Rammstein...

GS: So you guys like Walter beer (a shirt was dedicated to it)?

BS: It was our favorite beer at the time, also the cheapest... It’s not that we oly drank Walter, but it’s kinda legendary in Estonia. Obviously this was all a big joke, don’t take it too seriously.

GS: What do you guys feel the state of hardcore is nowadays?

BS: Outside of Estonia, it seems to be going pretty well for hardcore. A lot of bands get recognition abroad, I don’t know about the Latvian scene, but it looks good pretty much in the the rest of the world.

GS: So any words for the readers?

BS: If you like us, book us! We want to get out there and play different places! The video’s give a nice impression of what we are and what you can expect from us.