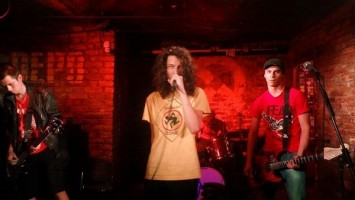 I’ve been to the Baltic States rather often and I have seen a lot of bands. I’ve been reviewing and writing about music for various Dutch sites and magazines for a couple of years so I have seen and heard a thing or two. So when I was told about Alternative.lv and asked if I had some ideas or wanted to write something I was excited. So here I am writing about bands from the Baltic’s for your pleasure as an outsider's look at things.

Johnny & The Burnouts is a reasonably new band on the scene as far as I’ve understood. Kastete likes them and so should you. They play that fierce, wild thrashcore that reminds you of the likes of D.R.I., Nuclear Assault, S.O.D. and Municipal Waste only with their own bitter tang of dissatisfaction to it. Johnny & The Burnouts are not one of the bands that jumped the bandwagon on the neo-thrash wave a few years ago, they only started out in 2012 and really don’t feel like being part of any hipster scene or poser band propaganda front (*cough*…NME..). So, let’s keep this the way it should and show you the band as it is.

Raw, unrelenting, oldskool punk rock made by some guys with a passion for thrash core, black flag, skateboarding and BMX. Their live shows seem to be one continues stream of adrenaline, based on the video’s that can be found here and here for example. Sometimes with getting some info about a band you have to rely on the standard bio, sometimes you have to drag the info from the band members. In this case no questions were asked at first, I did those later and added them up to the first outpour from Johnny Mad, so here’s the scream from the big mouth (if you’ll indulge my semi-Henry Rollins reference here):

Johnny Mad: “This is my point of view, because I kinda started this band. However, I think everyone in the band agrees that what I’ll tell you is pretty accurate. I hope this isn’t a too long story, but I feel every part of what shaped this band needs to be said.”

“When I was a kid, somewhere in the middle of the 2000’s, I started to hang out in the city of Kandava, which had a DIY punk band called Kukaiņi (the Bugs). Luckily, we got to hang out for many years to come and they asked me on one day to go onstage and sing the song ‘Commando’ by the Ramones. I felt this was what I wanted to do and the next thing the drummer of Kukaiņi started as the guitarist, my neighbor got on bass and we got a drummer that was a metalcore fan. We started a band called The Acid Boys.

Of course we got rid of the drummer soon, after a few gigs. I really hated metalcore, but also he just couldn’t play a backbeat for shit… So our guitar player picked up on the drums, since he was a pretty bad ass rock’n’roll drummer. We found a new guitar player in Nikita, a Russian kid into heavy metal. He was just stoked to be in a band and could play some mean buzzsaw guitar, which Johnny Ramone pioneered. We mainly did Ramones covers for some years, just for the fun of it, the band was known as The Gabbers back then.”

GS: Are you familiar with the Gabbers culture in the Netherlands? (See here for that)

JM: “Well, we changed the name of our first band to The Gabbers, mainly influenced by the name of GG Allin's first band The Jabbers. So we mixed that up with the chant 'Gabba Gabba Hey' by the Ramones (in Pinhead). When we found out about this Dutch culture, we were like: ''well shit''.But well, it's pretty funny, since it works out. Dutch Gabbers are hardcore too and that’s what we became.”

“We really sucked, but old punks were happy to see new kids listen to the good music. We evolved, grew more angry and started to make our own music, which paved the way for the band now known as Johnny & the Burnouts. We never expected many good responses, since we make some Nazi jokes, say serial Killers are innocent and that sort of stuff.”

GS: You mention some pretty edgy type of humour. Is it part of some political view for you?

JM: “It's really just for shock value and a dark sense of humour we share I guess. We're not a political band. Everyone in Latvia knows about its politics. We just like dark humour, oldschool BMX and skateboarding and the short message “Do Shit, Destroy Shit.” We try to steer away from that. We call metalcore fans out and state that Pink Floyd is shit. We really hate that new trend in music full of posers and pussies. Since we haven’t been beaten up yet, we must be on to something on that pussy level. Surprisingly, people seem to like us and we gain more attention. We are thankful for that, but we’re really just in this to show our love and dedication to what we consider to be the sound of real punk and hardcore”

GS: I just want to check what you mean by that metalcore trend.  Do you mean like the current deathcore trend and hipster culture, the 'posercore' that prevails in the hardcore scene?

JM: “Yes, exactly that trend where your attitude is determined by the amount of metal pieces in your face and meaningless tattoos rather than your actual support for the scene and honest music. Like you said; 'posercore'. We've also seen this in other 'so called' punkrock or hardcore bands. We don't get how all that showing off has anything to do with the idea of being a punk. All that acrobatic shit they pull on stage is just comedy to us.”

GS: You guys sound like an angry band, where does this anger come from?

JM: “I guess it comes out of the amps like that. I mean, we're not going to sing about pretty stuff, since we don't find that in our daily life. Life is so fake nowadays, we are not about that, we don't play music for rich brats or hippies, none of that is real, and our music is. For me personally, I have health issues and at times I feel like music is just all I have that really matters, it fuels me. I don't like to complain about my problems, so I write music and get on the stage to forget about daily life and the bad stuff that happens in it, even if it's just for some moments. I will do anything to play music, because even though it sounds angry, it makes me happy and it's so much more than just a hobby.

GS: So I have to ask about Kandava, having passed through the town a couple of times (and once gotten stuck in it due to a broken down bus), what else is going on there music wise?

JM: “At the time, in the early 2000’s, the only two bands from Kandava that I know are Kukaini and Sudi (The Shits). Thankfully there's a strong regional scene around with bands like 62 I.p., Kriegopfer, the Warps and Travolta!. The Kurzeme scene was very cool in the mid to late 2000's and these bands have influenced us in a major way, since they were what we listened to endlessly as kids. Our main inspiration was obviously the Ramones, since we played covers from them for a while, so naturally that evolved into our sound. We didn't want to be a cover band forever so when we got a bit older and more pissed off, we became the band we are today, playing our own brand of hardcore and punkrock. That's still the case.”

“We picked up our instruments and this is what came out. We were inspired as well by anything from 50's rock'n'roll, Motörhead, Dead Boys, Gang Green, D.R.I., Zeke, Fu Manchu and Bad Brains. Also stuff from the NYHC scene, like Agnostic Front and Cro-Mags but also the originators of doom metal, Pentagram. We saw Adolescents at last year’s LabaDaba festival, which was a huge inspiration for us to see. Any kind of music, made for the right reasons, is good for us. We would love to share the stage with ZEKE and one of Hank Williams III's projects one day.”

GS: So who are Johnny & The Burnouts really, where did the stage names come from?

JM: “We only used them for once on our page as a joke and reference to certain rock bands and songs. Angelo 500 is a craftsman in Valdemarpils, he also plays bass in the rock'n'roll band The Peach Rockets, they were the guys in Kukaiņiback in the day. Nick Burnout is studying in Scotland, which is the reason that we're more active in summer. Mayrond Speed; no clue what that guy is doing, he's a very strange and secretive guy, but also tons of fun. We've been doing this together since 2007. Me, Johnny Mad, I just try to survive the days and keep my mind straight, though I hope to actually go insane one day. That way I won't have regrets for throwing some grenades in our government building.”

GS: So, what's the general punkrock scene about nowadays in Latvia?

JM: “Well, to call it a scene is pretty farfetched. It's not really centred anywhere, just a couple of bands we love to watch and play with like Kastete, Defectives and PND, though the audience of PND is made up out of many different people so not all of them will get what we're about. There's also a band called Wagars. We haven't played with them yet, but we hope to do so soon. Tesa and old timers Inokentijs Marpls deserve to be mentioned too. That would be all we like these days. We really hope punks will get more bands going, because we really do need them. There are also the kind of bands that try to relate the scene to laughable stage antics and trendy behaviour we disapprove of as a band. However, the irony is that they claim to be hardcore and punkrock, but embrace exactly those trends and show values that they claim to stand against.”

We don't wish to deal with those. There is also a cool Estonian band called Project Dekadenz. As far as I know after my visit to Tallinn for their gig, it seems they have a stronger punk scene than us in Latvia. We hope that the mentioned bands and maybe new ones will change this in the future.”

GS: What do you guys see for yourselves in the future?

JM: “Just continue to do our thing and get more gigs outside of Riga and outside of Latvia. We'd love to go on tour, do fun stuff.  A shout out here to Kastete for recommending our band and everyone that comes to watch the cool bands in Latvia. In the summer we'll have plenty of news for you people so stay tuned!”

For me, Johnny & The Burnouts are as punkrock as it gets. Coming from a small town, playing punkrock because... fuck you! That attitude, that raw and unwavering passion is something that is hard to find nowadays in my neck of the woods, where the only real anger can be found among squatters and vegans for reasons that have more to do with ideals than with life itself. These guys are real, and I wish them well in their dreams of a healthy scene and touring far and wide.