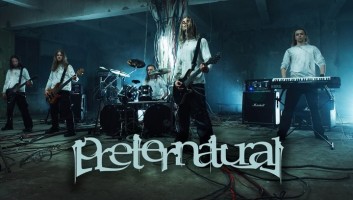 I’ve been to the Baltic States rather often and I have seen a lot of bands. I’ve been reviewing and writing about music for various Dutch sites and magazines for a couple of years so I have seen and heard a thing or two. So when I was told about Alternative.lv and asked if I had some ideas or wanted to write something I was excited. So here I am, writing about bands from the Baltics for your pleasure as an outsiders look at things.

So the next band that was recommended to me got me kind of excited. Anything with black metal in its biography excites me to be honest. If you're interested why, well.. I've graduated for my masters degree with honours only last august on.. black metal (if you are keen to check it out, find my thesis in English over here). Preternatural is a tricky name to pronounce it seems for me, I keep stumbling over parts of the name. What makes it extra awesome is that one of the founders is called Vlad, how metal do you want to get?

Now, all nonsense aside, I had not heard of this band before but they seem to have become a pretty big thing in Latvia with their intense blend of black- and deathmetal. Any band that plays shows with Cradle Of Filth, Cannibal Corpse, Vader, Nile and Soilwork (and more) is doing pretty well, especially when their  homecountry has only got a marginal scene (no offense, but like all Baltic countries, only a few find the major labels). I will not use the term dark metal, even though the band does, because I dont believe it covers what these guys do. Do google the term, it really won’t tell you what you can expect when listening to what Preternatural has to offer to sooth your inner ear. They have a particular dark sound obviously, but like most bands… Does any label really fit? If you really want to use it, the comparison with Cradle of Filth is uncanny in the case of Preternatural.

Preternatural means that which can be conceived rationally, but is yet unknown. So that which others would call paranormal probably. It has a sort of scientific edge to it in my opinion. In fact this is a pretty smart name, which makes me wonder what these guys do in daily life and what inspires them.

Listening to their songs that can be found around the web, like the video for ‘Cryophobia’, one can hear the clash of black metal leaning towards a more comprehensive sound and death metal in the Göthenborg style. It’s as if Dimmu Borgir and Keep of Kalessin play tennis with Kalmah and Norther, while In Flames plays umpire. I really don’t care for tennis but I’ve forcibly watched a game today on TV and found that it looked like a complex dance where both take initiatives. So, the band has been around for a while. In fact since 1999 when the idea of forming a band started taking shape. The influences of the band have been far and wide when it comes to different metal genres. After doing some demo’s, lots of practices and gigs, the band decided on some more atmosphere and a keyboard player was added in 2006. A year later the debut came out and the band has been working hard ever since.

“Preternatural is an old synonym for the word supernatural. It’s a very old English word, you can rarely find it being used these days. The correct pronouncement is [pretineachural] and it’s meaning is rather complex. It’s like… you might find out-of-the-way seen in a disturbing matter, that might force you to change your beliefs afterwards…” So writes Serg, vocalist and guitar player of the band. He started it back in the day together with Volod after having dreamt of having a band of their own one day for ages. “We’re just a bunch of freaky folks, living our miserable lives in the supreme universe, just waiting for the answers we will hopefully never get.”

“Being a band from Latvia, we do get ignored most of the times, sometimes people write we’re from Lithuania and genuinely seem surprised and amazed when they deal with you as a band concerning records and live performances. It’s not hard to get attention from a small fanbase ofcourse, as long as you act natural. People do often mention Skyforger when they hear Latvia, but we don’t get compared to them. We respect them a lot, they’re good friends of us and did much for the Latvian metal scene on a global level, alongside with Neglected Fields.” That’s a relief I’d say, since there is a tendency to compare bands with other ones from the same country in the press. The small Latvian scene is an easy victim of generalization and the big money. “What bands from Latvia should be checked out? All of our bands should get a chance to be heard and listened to, if no one will they’ll just release an EP, split-up and start a new project again…” Preternatural is not one of those bands. “We don’t know ourselves how we stayed together. I guess it’s chemistry and a wiall to make music. We’re also good friends, all of us, we don’t have the juridical responsibility, since we don’t make tons of money.”

“Me and our guitar player Volod formed the band when we were in high school as 14 year old teenagers. Our goal was to create a band and to play metal “music”. So, I guess, looking back, that’s our main achievement. We’ve been through some ‘’good times”, “absolutely perfect times” and “shitty times”. We’re still together, having the original line-up, and we’re gonna be a pleasure (or pain?) in your ears for some more time.” Ofcourse, a lot has changed during the time the guys have been active. “When we started we were all around 14 and 115 years of age and we wanted to sound like Neglected Fields – our teachers – but then you grow up and get in touch with different styles and genres. It influences your music, you grow up, you find yourself having all these influences in your head and the sound becomes yours, something you produce. The funny thing is that no matter how much you experiment in your music, no matter how far it takes you, you’ll always sound like at those first rehearsals.”

So what is Preternatural trying to bring us in their music? Well, here’s the short and definitive answer by Serg. Also, what the musical inspirations are. “The sci-fi/horror movie scenarios that are embraced by metaphorical shit I call lyrics, covered by high gained low tuned guitars that smash the walls of keyboards, ending up with drilling blasts of drumming, ha-ha-ha. But, honestly, I don’t even know, we just like “eerie” melodies, we mix a lot of different styles today, but all of that sounds like a soundtrack to something. Like a heavy, dark soundtrack to your life, I would say.”

“Musically, we’re into different bands really, each and every one of us. That’s what makes us do our stuff the way we do it. It ranges from Mayhem to Duran Duran, hopefully you know what to expect from that. In common we have bands like Neglected Fields, Emperor, Dimmu Borgir, Death, Samael, Cradle of Filth, Nevermore, Fear Factory, Devin Townsend… I think this list could continue forever…”

“We’d like to play gigs with anyone really. There’s a shitpile of bands that we’d love to share the stage with. No matter how big or small the band is, but the next gig is one we are massively excited about on the 17th in Riga. Like I mentioned, I’m a huge fan of Cradle of Filth and playing with them is a dream coming true. It’s been four years since we played together on the 2008 Metalshow Festival in Blome. It’s double cool now, because me and Martin (drummer of Cradle of Filth) are involved into a band together called Inner Fear, where I do the singing.

“Inner Fear is the band of Martin Marthus Škaroupkafrom Cradle of Filth, who originally hails from the Czech republic. The band existed before 2004 when he moved to the UK to join Cradle of Filth. He never stopped making his own music and always wanted to restart this band. When we played with them at the Metalshow.Lv festival in 2008, he was impressed by us and offered me the position of vocalist. By then he had recorded and composed enough demo’s but the band only had one member (Khopec), so I recruited Serhio from Neglected Fields, Vic Anselmo for female vocals. Martin recruited Ashok from Root as second guitar player. We worked on an album in different studios and different countries. I did my mixes at home and Khopec, who plays guitar, mastered it at home in his studio. The result was released in September. It’s called ‘First Born Fear’and we did a small tour in the Czech Republic and Slovakia. Musically, it is in veins of sympho black metal bands of the 90's, but with more electronical touch and sounds. We’re already working on the next one.”

I find that Latvia has again proven to have numerous great bands hidden within the small scene. It harbors bands like Preternatural, that should have gotten some international attention years ago. Still, they’re playing with their heroes in Riga, I hope it’ll be as memorable as growing up and listening to a band that deeply inspires you is. “We will just keep on rehearsing, recording and performing like we’ve done all the time this far. We’ll see what happens.” Finally, the food question. “I think we’d compare ourselves to alcohol more than food, because alcohol makes people love eachother, by all sorts of ways.”