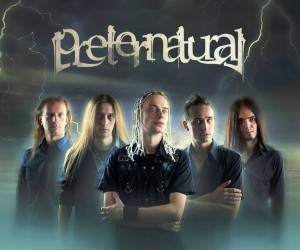 Low-tuned guitar riffs, blasting rhytm section, multidimensional screaming vocals and ambient atmosheric melody. These features would probably describe the band's music best. The story began in 1999, when two school friends Serg and Volod, being obsessed with a long-standing common dream of creating a band, started taking private guitar lessons. Soon, feeling enough skills to make some chords, the guys had recruited a bass player Den and a drummer Gin from the other band that had been rehearsing in a local area studio and started to play together. Each lad in the new band was influenced by absolutely different subgenres of metal and music itself. Instead of arguing upon, who would lead the style, the band had decided to create the unique link between their influences of death metal power, black metal grimness and ambient music's keyboard atmosphere. But with such a musical mixture the band needed a proper theme for lyrics and the name of the band must have been equal, either. Since, Serg (vocalist, guitaris) as a teenager, was drown in the studies of paranormal and psychology, the problem of lyrical theme had dissapeared. (Ever since, every song of the band is a different story dedicated to paranormal and our perception to that phenomenon in our life). The name problem hadn't lasted, either, cause one morning, Serg took the English language vocabulary, opened it at a random page and accidentally saw a word Preternatural. After 24/7 rehearsing, 3 independent demos and a lot of local gigs the guys decided to add more atmosphere in their music and they found the new member Euge, who took a permanent position as a keyboard player in 2006. The anticipated goal was finally reached in 2007 with the debut album "Statical" release. The success of the album, later helped the band to perfom on various festivals and gigs around Baltic states and Scandinavia, supporting the bands like Cradle Of Filth, Cannibal Corpse, Vader, Nile, Soilwork, Atrocity, Leave's Eyes, etc. As well, as the album had acquired a lot of positive interest among metal press and fans. Some people called it "unique and non-heard thing before", some people called it "too influenced". In any case, the ground of fans was formed, and the band decided to move the same musical way, but with more electronical experiments, that has born the new EP "Cryophobia" in March, 2010. As a support for the release, the band had shot their debut video for the self title track "Cryophobia". Putting forward their knowledge,skills and influences further in 3 years the band begun recording their second album "Angeloid" in March of 2013. The album was tracked, recorded, produced and awaiting to be released on the 15.02 of 2014 by the band itself. The idea of the album title is a sci-fi fiction like story invented by Serg where "Angeloid" is the next step of evolution for humanity, but in order to reach that level of spirituality, every single human being must sacrifice his/her body at the same time. During the creation of the album the band has had a serious line-up change, bringing a new keyboard player Martin and bass player Serhio (ex-Neglected Fields, Inner Fear, Biomorph). "Angeloid is not just an album, it's the music for the goddamn blessed people" says the band. And so the new era of heavy ambient spirituality begins... Releases: Presence (MCD) - 1999 Lifetext (EP) - 2002 Chaoticon (EP) - 2004 Statical (CD) - 2007 Cryophobia (single/DVD) - 2009 Cryophobia (EP) - 2010 Angeloid (CD) - 2014